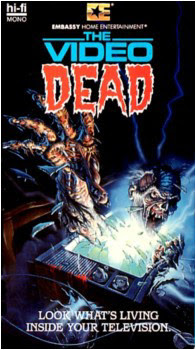 It's a Tuesday during the Countdown to Halloween, which means another scary entry in Tuesday's Forgotten Film. This week, it's the 1987 comedy-horror The Video Dead.

The film, predating The Ring by 15 years give or take, is about a television that shows only one program--a zombie movie that comes to life, producing flesh eaters straight out of the tube! Without giving the rest of the plot away, that's pretty much everything that happens. But for a fun, cheesy 80s horror flick, especially one that was, appropriately enough, released directly to video, what more do you need to know?

I can tell you that the movie is currently available on Netflix, and that Scream Factory, the newly formed horror division of Shout! Factory, is releasing the film on Blu-Ray for the first time in 2013.

Oh, and here's the film in its entirely. Enjoy!