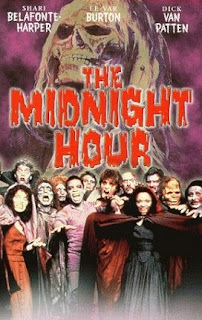 Time of another horrifying Tuesday's Forgotten selection. This week, it's the obscure 1985 TV-movie The Midnight Hour.

One eerie Halloween night, a group of fun-seeking teenagers sneak into their small town's history museum (always a bad idea) and steal some old vintage clothing and come across an old scroll containing an ancient curse. The foolish teens read the curse off the scroll for kicks (always a bad idea) and go on their merry way to their big Halloween party, unaware that they've unleashed evil forces throughout the town, turning the teens into vampires and raising the dead (dumb kids). It's up to one young man and a mysterious high school cheerleader he's never seen before (hmmmm) to put an end to the curse.

The plot of the film isn't anything that hasn't been done a thousand times, but it's unusual to see something like this made for TV, and the execution is quite enjoyable. The movie also introduced me as a child to what is one of my all-time favorite songs, Baby I'm Yours by Barbara Lewis, used memorably at the end of the film.

Unfortunately, it's not currently available in print; it was last released on DVD in 2000, so you'll need to hunt the movie down through the Ebay/Craigslist/Internet retailer route.

What a strange cast!

Shari Belafonte nudges it in the impressive, or at least impressively easy to watch, direction by herself.