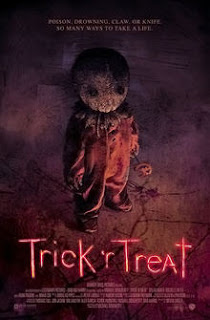 This past week, I finally watched the film Trick 'r Treat, a beloved favorite of many fellow Countdown to Halloween bloggers. The film had a good balance of laughs and scares, with a bit of gore thrown in. I usually don't gravitate to intense horror flicks such as this, but I found it clever and fun, with some nice twists in the story and not taking itself seriously. Little did I know until after seeing the film that the "host" of the movie has made an appearance before.

The adorably terrifying character that unites the several tales told in the film is Sam, an assumed defender of Halloween traditions, and he will literally defend those traditions to the death, including his very first appearance in this 1996 short animated film created by the feature film's creator, Michael Dougherty.

So glad you watched! Now you are ONE OF US! LOL

Love the film and love the shorts. Yes, there are other, live action Sam shorts. I believe there is a Back to School one, a Father's Day one and one about making friends. Check youtube!

Thanks Joe! I have seen the other shorts, I believe due to your posting them in the past. You love that little pumpkin demon, don't you?

Yes, I do like Sam. I think he is one of the few recent horror icons to have any chance at longevity!