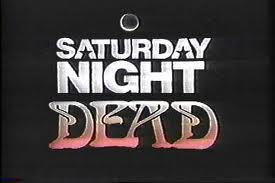 I've talked about local TV horror movie hosts several times before, but that won't stop me from talking about them again. Today I mention a fun show that aired through most of the 1980s here in my beloved Philadelphia, Saturday Night Dead.

Saturday Night Dead aired at 1am Saturdays on KYW-TV Channel 3, then an NBC affiliate, now a CBS O&O, immediately after Saturday Night Live (get it?). The program aired the standard cheesy, low budget horror flicks you'd expect to see on such a show. The hostess of the program was Karen Scioli better known as Stella, the "Maneater from Manayunk" (a posh section of the city).

Stella, along with her butler Hives and several other silly/creepy cast members, would make fun of both the movie and themselves until 3am every week, and as a preteen boy, I ate it all up, even though I was afraid of horror films, even the bad ones. I would stay awake as long as I could just to see the antics of Stella and Co. Such programs are very rare anymore, and I'm glad I kept my eyes open to catch all the laughs.

Here are some segments from various broadcasts over the years. Enjoy!

Also, and completely by coincidence, Karen Scioli gave an interview with the New Jersey publication The Aquarian just this morning. I didn't know until I did research for this blog post! Here you can find out what she's up to these days. Click here!

Never saw this, but it sounds awesome and I bet I would have just loved it!

Yes indeed. The movies were bad, the jokes were worse, but that was the point :) It was a great deal of fun, something broadcast TV often lacks today.

Hah. Well, I'd say Manayunk is more quasi-boho than posh, but mostly it was there for "Man/Man" sonority...the Maneater from neighboring Andorra might've worked, if nearly as many folks had ever gotten drunk in Andorra as in Manayunk...where the hyperlocal economy is split about evenly into bars, boutiques and galleries, and everything else there (at them moment, mostly runoff water from Roxborough, just uphill).

Hm. Overlap with Elvira and MST3K, the major national presences of this latter-day wave...