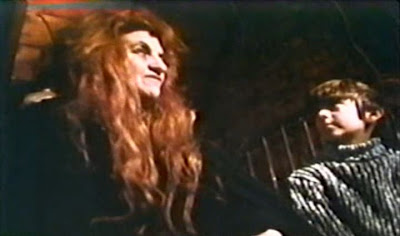 Tuesday's Forgotten Film this week is the short children's film Winter of the Witch.

Winter of the Witch stars veteran actress Hermione Gingold as a lonely witch who must learn to come out of her shell when her home is occupied by a single mother and her son, who move to the country to put the hustle and bustle of city life behind them.

This obscure film has an extra reason for being included under the Tuesday's Forgotten banner: this was released only as a classroom film strip in 1968 or '69 (different sites have different dates) rather than movie theaters or TV. If you were of school age at the time this was released and enjoyed this movie, today is your lucky day.

Actually, most Learning Corporation of America films got some play on PBS stations during the educational hours (among other things, it was a relatively efficient way of getting the materials out to the schools, if they had Umatic or other tape recorders of similar vintage, or built the lesson plan around the broadcast time). When you write "filmstrip," whippersnapper, you refer to the slideshow presentations of the past on a long, wide, durable filmstrip, not altogether unlike microfilm only much shorter...rather than an actual film, on 16mm for most classroom use. I do remember looking at filmstrips...and 16mm film...on my own as well as in group classroom settings in my school days...yes, That middle aged...

Anna Strasberg...I wondered if she was related to Susan S...only by marriage to Papa Strasberg...Susan was a year older than her stepmother. That she slightly resembles her older "daughter" adds a little to the squick.

I believe LCA also had a hand in The Most Important Person, the short educational cartoons I've written about before. They aired first on Captain Kangaroo, then PBS and syndie, most notably on the Kaiser/Field stations (you may have come across them in the Boston area).

I wondered myself about Anna Strasberg. I may have to go to the Google or the Wikipedia on this.

You'll find, as I didn't choose to mention, that Anna Strasberg was apparently also supervising the young Drew Barrymore at least some of the time...since her stepchildren were, again, her age, though she and Lee Strasberg also had two kids of their own...and you might recall how Drew Barrymore's teen years went. Ah, well, perhaps time spent with Strasberg was time not spent with recreational chemicals in the Barrymore tradition.

I've mentioned this before, and Chuck Esola was particularly croggled by his suddenly crystallized memories of this, but the same Crown Pictures that was doing a number of (usually not so good) educational films in the '60s and '70s was also churning out sleaze, mostly biker gang pix and the like, for the drive-in market...and they were usually worse, though some did provide MYSTERY SCIENCE THEATER 3000 fodder. If you see an exploitation flick from 1967 that manages to be both cheaply professional and also worse than an AIP or Allied Artists release, good chance it's a Crown International.

I probably did see at least one or two of those cartoons on the Kaiser/Field station, or the several PBS stations, I'd audit in the Boston area, particularly in the early '70s. I basically never did have the cliched Only Three or even Four Channels broadcast tv situation as a kid...always lived in urban-enough an area to have at least five or six broadcast choices, and often as many as eight or nine, even if reading and other activities weren't too challenged by the lure of what was on those stations a lot of the time. I mostly missed the DOCTOR WHO boat in the '70s, for example, as someone in the first US market to get access to it (WGBH Boston imported it, though mostly played it at first on WGBX the UHF sibling, and farmed it out to the Springfield WGBY in Western Mass.) But I was certainly All Over MONTY PYTHON, having seen edited bits on ABC latenight just before the Eastern Educational Network, with WGBH at its center, started piping it into the States unfiltered in '75.